The first of the two back-to-back events of the 69F Cup – Valencia Mar Sailing Week, hosted by Valencia Mar, ended on Sunday 17th April. Great competition, adrenaline and fun in the water as well as on land among the 10 crews attending. The weather conditions allowed nine races, although most of them were concentrated on Saturday 16th, the local Valencia wind allowed everyone to fly on the water both downwind and upwind. 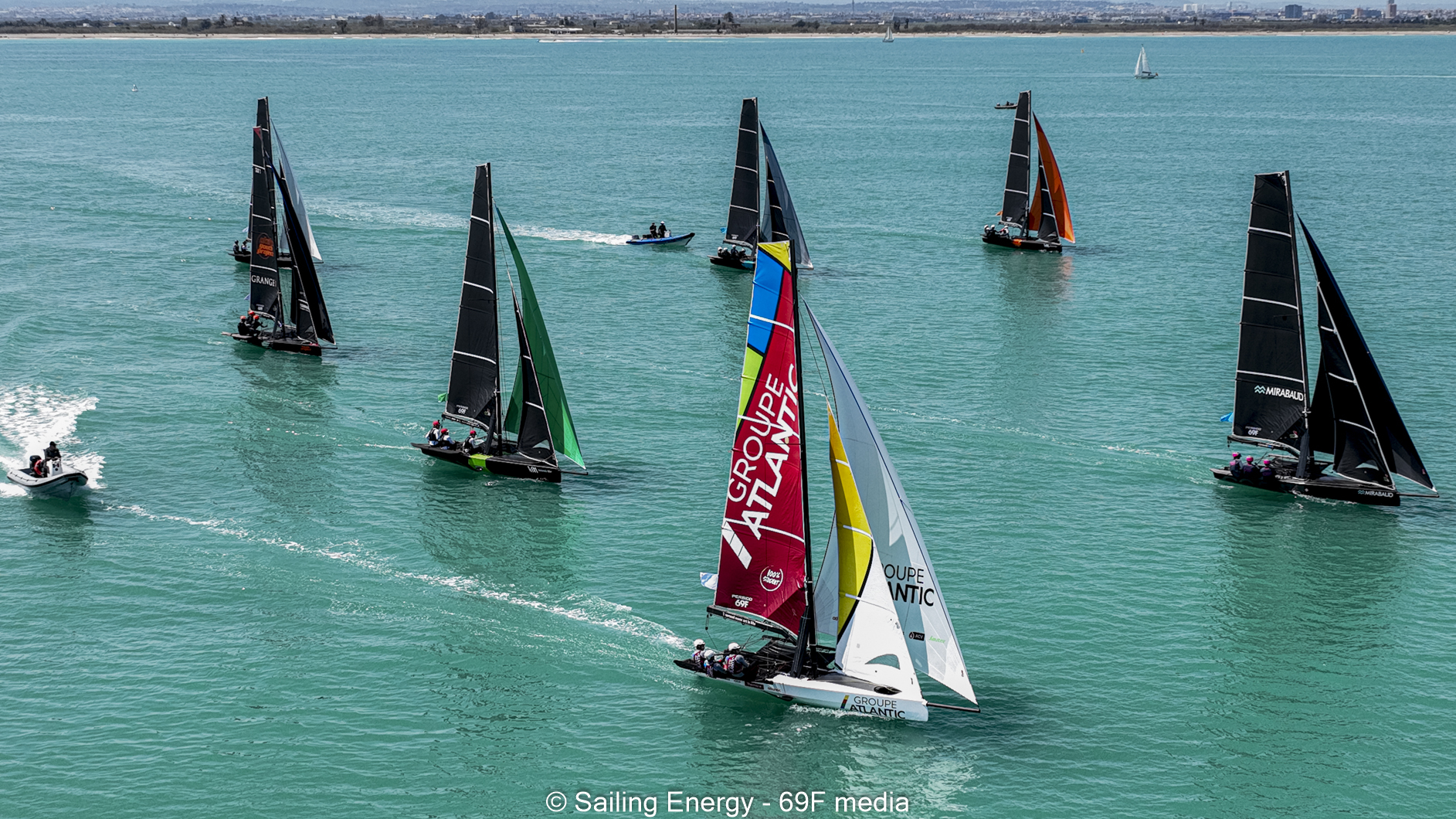 There has been an absolute domination of the Finnish team Fin1Racing, with Allan Norregaard, Janne Jarvinen and Iago Lopez, who won seven of the nine races, showing that the winter training sessions, mostly right in Valencia, has paid off.
“It’s really exciting to see that the level is so high – said Allan Norregaard – we’ve been training mostly on our own, so it was nice to finally measure ourselves against the others here and get back to racing. It was a very intense and close race, really fun!” “We are happy with our performance with Iago and Janne in the boat this week, we won! Next week Iago won’t be with us, we’re sorry, but it’s ok, we’re still learning, and even though we won this one we still feel like we’re improving.“

In second position finished Okalys Youth Project, a team from Geneva with Italian Federico Colaninno on board and in third position the French of Groupe Atlantic.
“It was a great event, especially on Saturday: a super day, windy, fun and difficult to manage. I hadn’t raced in this class since November, and I had almost forgot how good it is! We fought hard with the French and Finns, they trained this winter and it showed, we will do the same this season to be ready for the Youth Foiling Gold Cup final in December,” said Federico Colaninno. He continued, “we are happy with the second place in this event, the team is completely new, I joined the crew at the last minute and I’m pleased to see that we are improving every day, I’m sure we will do even better at the next Youth Foiling Gold Cup event.“

“It was our first race in 69F,” said Groupe Atlantic’s Valentin Sipan, “we have a lot to learn and a lot to discover, so it was crucial for us to see how others are doing and where we fit in with our preparation. There are very competitive teams, like the Finns and the Swiss, and we have a lot to learn from them. We need to improve and that’s why we’re here. We had a lot of fun on land and in the water, let’s see how next week goes, but I think beyond our result it will still be a fantastic event.“ 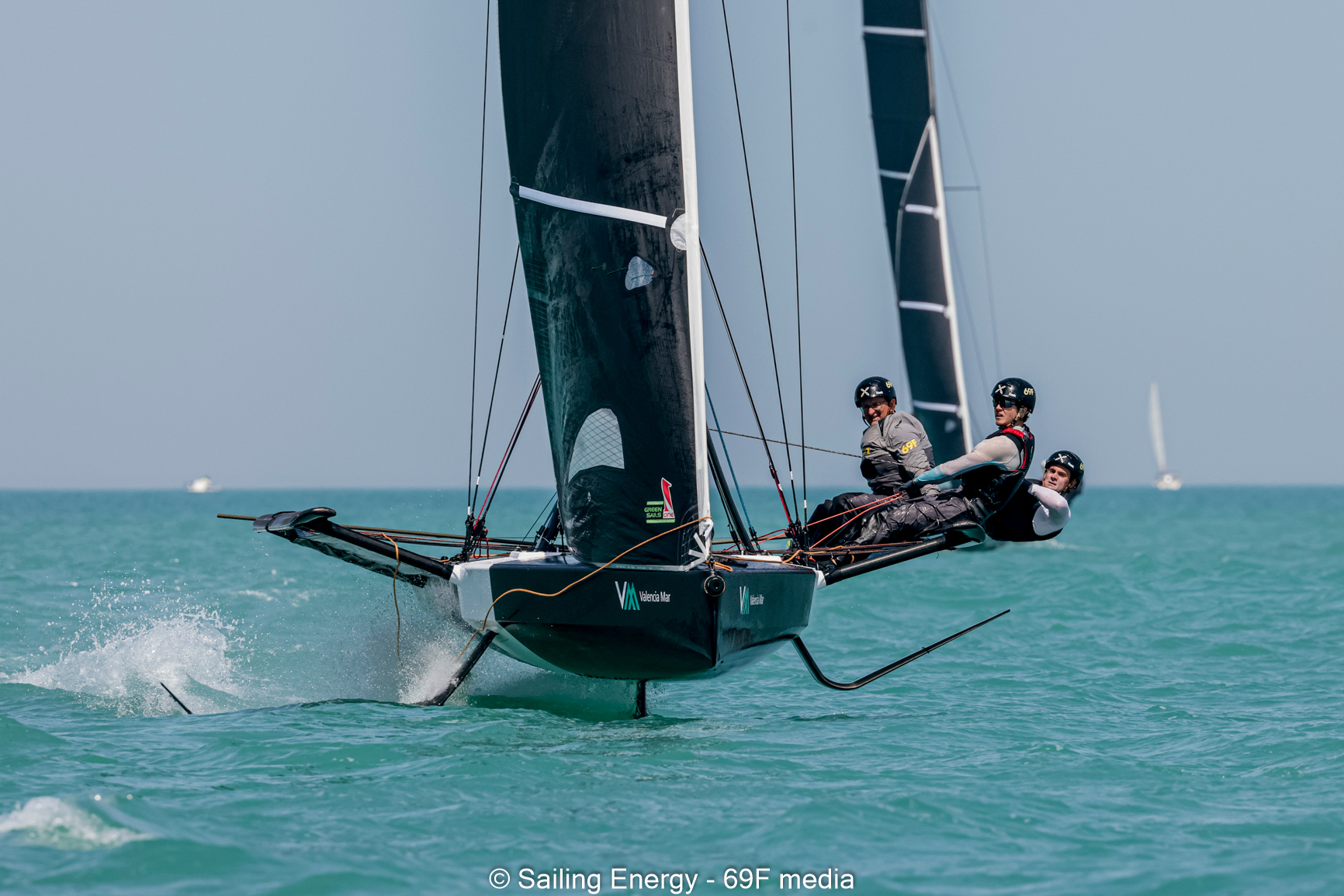 Groupe Atlantic plans to participate in the entire season in Europe and the two Youth Foiling Gold Cup events. That is why they will stay in Valencia and go back racing in a few days, from Thursday 21st to Saturday 23rd of April, at GP 1.2 of the 69F Cup – Valencia Mar Sailing Week also hosted by Valencia Mar, the Spanish base of the 69F. Along with them, eight other teams will be racing with sailors from nine nations. With Groupe Atlantic, also Fin1Racing will be back on the water, as well as the Swiss of Oceana Vivo, for the other teams it will be the first event of the European 69F Cup 2022.

The 69F Cup circuit is revolutionary not only because of the latest generation of boats, a scaled-down version of the amazing America’s Cup boats, but also because of the format and the possibilities to participate in it. With the two events held in the same location, the logistics for the teams that own the boat are obviously easier, but owners are not the only ones who can enjoy the emotions that the Persico 69F can offer. With the Pay-Per-Play formula, all you have to do is show up with your team, ready to go out to sea and eager to have fun: the boat and a 69F expert will be ready and available for a few days of training and also during the regatta, to teach how to move on board even to those who have never sailed on foils. 69F has two fleets of six boats, one in the US and one in Europe ready to be chartered for the entire season, or for as many events as you wish. And you don’t have to be a professional sailor, let alone have your own team. The boat is designed for amateurs, and Team 69F has a list of top names who can be part of your crew and help unlock the secrets of foiling, while enjoying the racing.

PHOTO AND VIDEO GALLERIES FROM VALENCIA